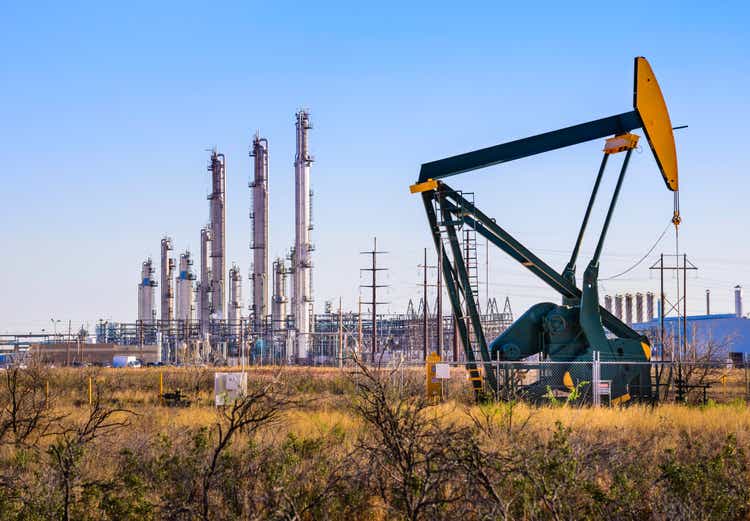 There is no doubt that the transfer of energy (NYSE: AND) published an excellent publication on the results in terms of numbers. The partnership reported adjusted EBITDA of $3,340 million, well above the Wall Street consensus of less than $3,000 million. Importantly, this rhythm was widespread among its holdings, with many operating segments (Intrastate and Midstream in particular) exceeding analysts’ expectations. Naturally, the outperformance of this degree led to an increase in guidance, with management raising the midpoint of its outlook to $12,400 million in EBITDA, up $400 million. That was the size of the pace, and there’s no doubt a potential upside in those numbers as we work through the rest of the year.

There was some trepidation though. What will put the investment base on edge is the outlook for capital spending. Growth was the story of the company’s presentation and conference call, representing a clear change of tone from preaching austerity and promising to focus on shareholder returns. Energy Transfer’s long-term growth capital expenditure guide of just $600 million is going to be thrown out the window. Below is a long list of projects, many of which have reached high probabilities of being built.

The upcoming shortage of natural gas takeout is an often-discussed topic. A lack of output, if unresolved, could jeopardize the growth trajectory of Permian crude oil production. Unlike the last time capacity was short a few years ago, the optics surrounding flaring make it a non-starter for public exploration and production companies. In addition, it would also hurt upstream producer revenues if natural gas differentials at Waha explode relative to prices at Henry Hub or other high-demand areas along the Gulf Coast. Fortunately, investors are starting to see midstream companies looking to fix the problem, with compression additions in major pipelines (Permian Highway, Gulf Coast Express, Whistler) being the fruit at hand.

Energy Transfer is also entering this market and is about to make a final investment decision (“FID”) on a new pipeline. Named Warrior, the pipeline would link Permian natural gas to the existing intrastate Energy Transfer pipeline system where there is spare capacity. Personally, I’m surprised Warrior was approached given the profit potential for energy transfer if natural gas differentials widen. The company is retaining 400 million cubic feet per day of capacity on its existing Permian gas transmission solutions for its marketing leg, so a difference of $1.50 per mmbtu between NYMEX natural gas and this that Energy Transfer could acquire gas for the basin would bring in over $200 million in marketing profits without a dollar of capital spent.

In any case, Warrior likely requires around $600 million in capital spending between 2022 and 2024, adding more spending to what is already a priority area of ​​smaller complementary Energy Transfer projects (Oasis expansion, Gray Wolf gas processing plant, and another as yet unnamed gas processing plant are already in the roadmap).

Once arguably a dead project, the prospects for liquefied natural gas (“LNG”) facilities in the United States have advanced significantly. International natural gas prices have risen in the wake of the Russia/Ukraine dispute, putting the arbitrage between US and international prices firmly in the dark after years of unease. Those with the capacity are printing money right now, and finally downstream consumers like utilities are ready to enter into longer-term contracts.

We already knew the power transfer was a buying capacity at Lake Charles, as a Feb. 18 regulatory filing with FERC indicated the partnership was in active discussion with LNG buyers. Since then, Energy Transfer has signed 5.1mmtpy of capacity, or about 33% of the potential nameplate at Lake Charles, with several major counterparties. An additional approximately 5.0 mmtpa should suffice to make the final investment decision (“FID”), and given that management has indicated that it has received inquiries on more than twice the potential liquefaction available, the FID seems inevitable. By the end of this year, Lake Charles will likely reach FID.

LNG facilities are prohibitively expensive. Even with the savings from operating the existing infrastructure at Lake Charles – LNG storage tanks, loading docks are already being built from it as an import facility – this is still a four-year project that will cost north of $10.0 billion. Some of this will of course be debt financed, probably at a project level without recourse to energy transfer. The banks would have to settle for Lake Charles with a 35.0% stake or $3.5 billion. Management has indicated that they are interested in selling up to a 75.0% stake to partners, which I think they are trying to pressure to keep Lake Charles debt off the balance sheet as part of consolidation under GAAP. If structured well, Lake Charles could mean “only” about $250 million in social capital per year, but if it can’t find partners on the terms it wants, the prospects are more onerous.

We continue to evaluate the opportunity to develop a petchem project along the Gulf Coast. If we are able to achieve FID, we believe our cracker will be a truly unique, world-class facility, providing unparalleled access to the cheapest feedstock through our pipeline systems, as well as unparalleled access to domestic and international downstream ethylene and propylene markets. through our pipelines, storage facilities and export terminal. We intend to have a meaningful partnership with one or more industry players. Additionally, we will continue to evaluate potential M&A opportunities in the companion animal chemistry space.

Petchem continues to be an area of ​​interest, particularly the construction or acquisition of an ethane cracker. This makes perfect sense, as Energy Transfer already handles a significant amount of natural gas liquids volumes and the industry in the United States is back in vogue given international costs. Dipping its toes in the pool, Energy Transfer completed a $325 million follow-on acquisition in March, adding storage assets and an ethylene collector system in Texas. This network already handles and transports much of the ethylene movement in Texas, but expect more effort to be made to develop more business in this market segment. The sky is the limit here when it comes to spending.

Don’t forget the Panama LPG project either. In the middle of last year, Energy Transfer and Panama signed a memorandum of understanding to study the feasibility of what would be called the Trans-Panama Gateway Pipeline, an asset that would transport liquefied petroleum gas between two terminals, opening LPG shipments to international markets. and help reduce congestion in the Panama Canal. Estimates of the cost of the project reached $1,000 million.

Energy transfer is firmly back in growth mode. In total, I expect billions of dollars to be added to the backlog by the end of 2022/early 2023, shifting growth capital spending to between $1,500 and $2,500 million per year in course of the next few years. It’s not necessarily irrelevant, and it really aligns with what Enterprise Product Partners (EPDs) and other large caps have set as their goal.

This amounts to over-promising. Management reacted to market pressure to focus on equity owners and gave forward guidance that implied minimal growth. Yes, markets are changing and spending isn’t going to stray far from its peers, but many will see this as an example of a few unitholders patiently waiting for the payout to return to prior levels. A rug pulled towards empire building is a clear fear. As long as the payout returns to prior levels and the balance sheet meets leverage targets, perhaps all will be forgiven. To do this, along with continuing to develop its network of assets, Energy Transfer will need all possible cash flow. Forecasts for 2022 might be conservative, but rest assured that every dollar will be needed.

These topics, among many others, are the ones I will address with the management of energy transfer. For those unaware, I will be at the EIC Midstream conference this week and have two dozen 1×1 meetings scheduled with industry leadership teams. Recaps will be published on my Marketplace service hosted here on Seeking Alpha.