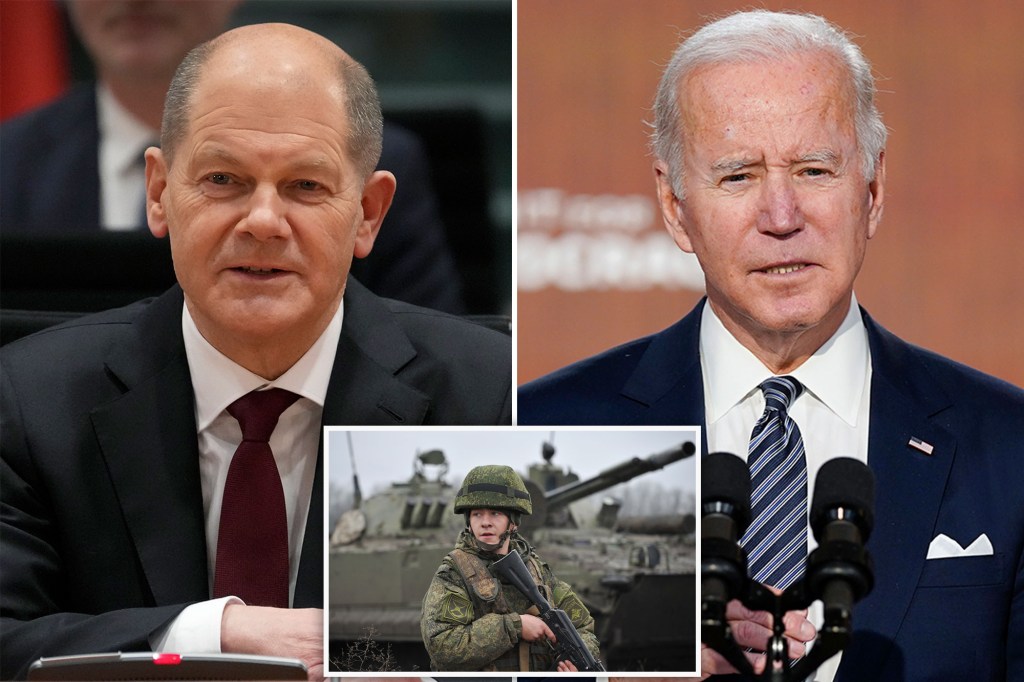 President Biden on Friday called German Chancellor Olaf Scholz, who took office on Wednesday, to congratulate him on his new post and brief him on his efforts to ease Russian-Ukrainian tensions.

Biden spoke this week with Russian President Vladimir Putin and Ukrainian President Volodymyr Zelensky amid fears that a build-up of Russian troops near Ukraine portends an invasion – as White House aides say the nearly operational Nord Stream 2 pipeline between Russia and Germany could be shut down if Russia invades its neighbor.

The leaders discussed our work together on the range of global challenges, including the continued efforts to end the COVID-19 pandemic, counter the threat of climate change and deal with the escalating Russian forces surrounding Ukraine, â€the White House said.

Biden spoke with Putin on Tuesday and Zelensky on Thursday. Between calls, Biden told reporters on Wednesday that US troops would not be sent to Ukraine to deter Russian adventurism, but that he hoped to announce new high-level talks to resolve the crisis.

“We hope that by Friday we can tell you and announce that we have meetings at a higher level, not just with us but with at least four of our main NATO allies and Russia to discuss the “Future of Russia’s concerns about NATO at large and whether or not we might find accommodations with regard to the drop in temperature,” he said.

Biden’s remark alarmed leaders of Eastern European countries worried about potential concessions to the Kremlin by NATO and none of these high-level talks were announced on Friday.

“Russia should in no way have a say in who can and cannot be a member of NATO,” Estonian Prime Minister Kaja Kallas said on Thursday. Bloomberg News reported.

Kallas added that â€œMoscow’s most worrying wish is to divide Europe into spheres of influence. We remember moments like this in our own history and we are by no means naive on this issue. “

Zelensky, however, offered a positive review of his call with Biden, despite apparently to ask Biden – unsuccessfully – to impose economic sanctions on Russia now, before a possible invasion, rather than after one like Biden threatened to do.

Zelensky said in a Ukrainian TV interview that he hopes to speak directly with Putin and that “I see the support of our European partners and the United States in this direction”.

The Ukrainian leader said Biden told him on Thursday that “Russia has assured the United States and the world that it does not intend to continue the escalation against the territory of our independent state.”

Biden was vice president during Russia’s 2014 invasion and annexation of Crimea and the start of a deadlocked civil war led by pro-Russian rebels in eastern Ukraine .

Republicans have lambasted Biden for allowing Russia to complete construction of the Nord Stream 2 pipeline, which is about to begin operations. The White House lifted sanctions on the project in May, Biden citing that the pipeline was “almost completely finished.”

â€œGas is not currently flowing through the Nord Stream 2 pipeline, which means it is not working, which means that it is not a lever for Putin. Indeed, it is a lever for the West, because if Vladimir Putin wants to see gas circulating in this pipeline, he may not want to take the risk of invading Ukraine, â€Sullivan said during a briefing at the White House.

Former US Ambassador to Germany Richard Grenell, who was also the former Acting Director of Intelligence for former President Donald Trump, tweeted, â€œStrategic disaster! [Sullivan] now say that [Nord Stream 2] could be used to take advantage of Russian behavior. Biden has already given Putin a completed pipeline. Sullivan is struggling now, but it’s too late.

Here’s what to do with the decelerating Vascon Engineers (NSE: VASCONEQ) rates of return