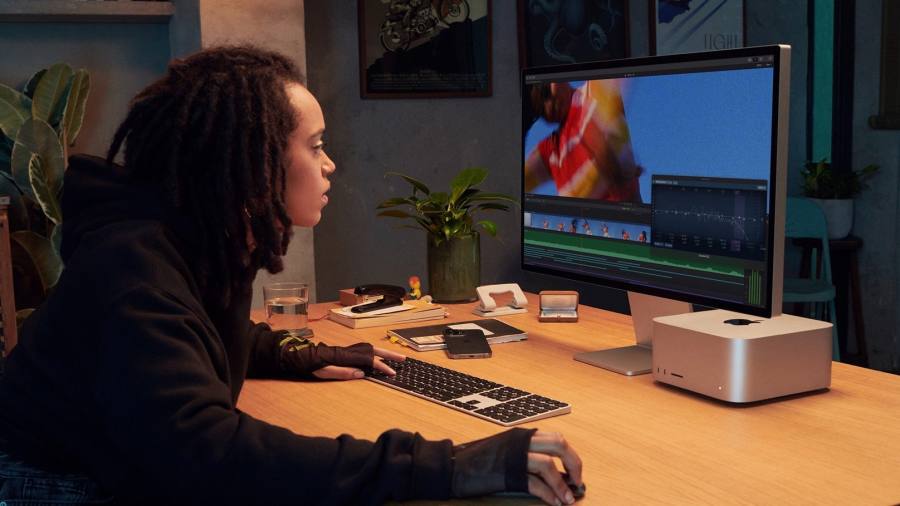 Apple on Tuesday announced the launch of a high-end desktop computer that would take advantage of its successful homegrown M1 chips, as it strives to capture a bigger market share in PCs after its split from Intel. two years ago.

The Mac Studio, starting at $1,999, is similar to a professional version of Mac Mini and connects to an external monitor. This comes as Apple seeks to gain similar market share to the iPhone in the desktop segment following the success of the M1 chip, the company’s first desktop processor.

Apple’s market share among global desktop shipments was just 2.3% last year, while in smartphones it held a 16.7% share, second only to Samsung. according to the Gartner research group.

The Mac Studio with the M1 Max processor starts at $1,999, while a version with the M1 Ultra – an upgraded processor also unveiled at the event – starts at $3,999. A customer upgrading the Ultra version to 128GB of memory and 8TB of storage would pay $7,999, a price that doesn’t include a screen.

Some consumers will “no doubt be outraged” by these price tags, said CCS Insight analyst Ben Wood. “But the reality is that the prices are more than affordable for post-production houses in the film and music industries,” he added, noting that these would likely be some of the biggest customers. .

“It’s a rounding error against the price of a high-end production camera,” he said.

Intel used to make chips for all of Apple’s desktop computers, but in 2020 the iPhone maker began designing its own processors as it sought to further integrate its hardware and software.

Apple also announced the redesign of the iPhone SE, which was first released in 2016 and refreshed in 2020. The move was widely expected as the company’s product portfolio lacked an entry-level 5G model for compete with 5G Android phones under $300.

The new iPhone SE features Apple’s A15 Bionic chip – the flagship processor used in the iPhone 13 – but it unlocks with Touch ID, rather than a face scan, its 12-megapixel rear camera n only has one lens and the screen is smaller.

Carolina Milanesi, an analyst at Creative Strategies, said the company was successful in segmenting the market. “You give customers a choice and they don’t have to look over the fence to see what’s available on the Android side,” she said.